I love this song “Hope Fell Down” from the album Difford & Tilbrook sung by Chris Difford and Glenn Tilbrook, the British duo from Squeeze. The phrase “Hope fell down” describes my past few days perfectly…and I’m not alluding to politics. Just my out-of-whack digestive system.

I’ll post Part Two of Afterlifethoughts and Angels next week; I’m not in the most angelic of moods today and the topic deserves to be written when I’m in a better state of mind & body. I got sidetracked this week by a stomach bug that struck Tuesday night and it made me feel inhuman, devoid of hope, and a big bitch to anyone crossing my path.

I made the big mistake of not immediately getting ahold of my glorious liquid salvation (a.k.a. Pepto Bismol) which I can safely take with my meds. I have two bottles now and those puppies are worth their weight in gold.

The bug was weird because it would come and go unlike any other variety of ick I’ve had. I thought I was doing better yesterday, enough so that I took Lucy out for her late afternoon walk. While I seemed okay physically, I wasn’t thinking clearly, because I took her at the absolutely wrong time of day in the redwoods: dusk.

Why is that wrong?

(Okay, okay, that’s two words, but you know what I mean!)

A three-week-old puma cub – awwww! Like human babies, they’re so dang cute when they’re little, but when they grow up they say “I hate you!” or they eat you!

I know what to do if I see a mountain lion: I make myself appear bigger in size, i.e. raise my arms high, yell, throw rocks, and DON’T RUN! (That awesome info. is courtesy of the local Santa Cruz Puma Project.)  I should’ve known better! At least I got so freaked out and mad at myself for my stupidity that chances are high I won’t ever make the same mistake.

When I got home, I ate dinner on auto pilot – I wasn’t hungry. Big mistake. Then I was sick again, and I felt less than human into the wee hours of the morning.

Today I have the huge luxury of being able to stay home and take it easy. My husband dropped off the kids at school and he can pick them up too. This kind of help is something single parents often don’t have. I don’t forget how fortunate I am to have a partner to turn to for support when I’m sick. 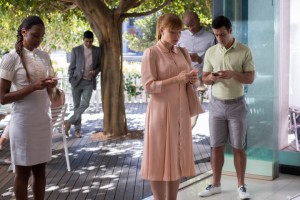 Being bedridden has been the perfect opportunity to binge watch a riveting, disturbing series called Black Mirror. Make that Disturbing with a capital D, but it’s fascinating all the same. The British series has been compared to the Twilight Zone, but I think it’s a totally separate animal.

I’m up to Season Three’s first episode called Nosedive and it’s one of my favorites; I’d suggest watching this one first instead of Season One’s first episode about the Prime Minister. Trust me. (Each episode is a contained story so you don’t need to watch them in order.)

Lastly, I want to share with you about my friends Jean Lee (Jean Lee’s World, author of Middler’s Pride on Wattpad) and Ann Preston Roselle’s (Bipolar & Me) inspiring, extraordinary blog posts.

Jean, one of the best writers I know, reveals facing “The Monster” who sexually abused her in “These Worlds Are Knives and Bridges.” She is coming to terms with being a victim of sexual abuse at the hands of a family member. I can’t tell you how amazed I was at this woman’s strength after I read it. Even though she wrote about dealing with a horrific kind of abuse, her post brought me up, not down, because of her bravery. She has taken a road so high it’s touching the clouds.

Ann’s post “Maintaining a Little Hope” beautifully, poignantly expresses how  she has gone through the sheer hell of depression, but she didn’t let bipolar disorder steal her goals or her hope. She’s a tremendous role model and power-house advocate. I can’t wait to call her Dr. Ann! 😉

I’ll see you after Thanksgiving – in the meantime, I send you lots of love and strength as the holidaze begin. Be good to yourselves!