You must listen to this entire song. I bet you’ll be very disappointed with me afterwards! 😉 I might wear a version of the lead singer’s outfit for my 1st book talk – what do you think?

First, here’s some essential 1970s rock education since most of you are way younger than I am. The song “Magic” is by PILOT – isn’t that a groovy name? Pilot was a rock group formed during 1973 in Edinburgh, Scotland by former Bay City Rollers members, David Paton and Billy Lyall. “Magic” was their first hit single and it reached #5 on the Billboard Hot 100 in 1975 in the US when yours truly was 5, and guess what? ECT didn’t erase any of it in my brain!!! Take that, anti-psychiatry folk!

It was a mellow afternoon in beautiful Lake Tahoe.  I allowed myself a little Twitter time (okay, I allowed myself too much Twitter time!) and I decided to search for any recent postpartum bipolar-related tweets. Occasionally I’ll discover a valuable contact or resource.

I spotted a tweet from a man I’ll call “Mike.” Mike had read one of my postpartum bipolar tweets and he responded by tweeting something slanderous about me. Mike had no idea that his tweet was about to get me Very Disappointed, but oh, was he to learn he shouldn’t mess with the one & only “Dyane Disappointment!”

I was very disappointed with your lack of action regarding my complaint.

Please allow me to explain:

Anyone can view it if they do a topic search for “postpartum bipolar” which is my field of expertise. His tweet is rude and slanderous – it implies I have been unfaithful to my
husband because of my mental illness. That is a total lie, but others reading it
might think otherwise and it could affect my professional reputation.

I have bipolar disorder and I’m an author and a perinatal mental health
advocate. This person’s slanderous tweet has triggered alarming symptoms of my
bipolar disorder, causing me to lose sleep, which can potentially send me
to the hospital. His tweet upset my family members which also triggered my insomnia.

I demand that you take IMMEDIATE action against this individual and remove his tweet
and his account or I will be forced to consult with my attorney. *

*This is my attorney, but Twitter didn’t need to know that! 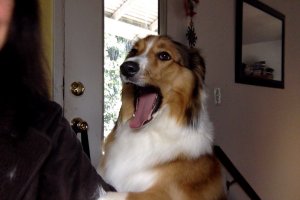 Perhaps it wasn’t just the magic of “I’m very disappointed” but also the magic of “I’ll consult my attorney” that got Twitter to take a second look at my complaint and not brush me off like a flea. I was so happy they did the right thing in the end!

I haven’t looked to see if “Mike” is active on Twitter again and up to his old tricks, or if he has opened a new Twitter account. Who knows? But if he pulls the same thing with me, you can bet I’ll get disappointed. And if Mama is disappointed, everyone’s gonna get disappointed! (Groan, I know!)

On a much happier note….

My friend Mel referred me to a very cool new site called BFFPetnet – a unique pet community. If you’re a pet lover like I am, check it out. I’m there under “Dyane” — if you could please tell your pet loving friends about it, I’d be grateful to you! (They’re on Facebook & Instagram too!)

You can read the 1st Official Birth of a New Brain article here in Mental Health Treatment by journalist David Heitz!

For those of you who like to look at brief videos of my dog, this twenty seconds of Lucy swimming in Lake Tahoe for the first time is too cute:

See you next Friday – I have some cool book-related updates as well as a section called “Dog Poop & Rich People” I want to share with you!

Have a great weekend, my friends! 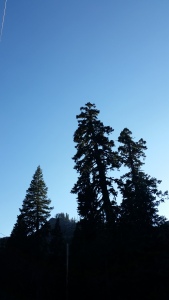 Tahoe Bliss is the name of my all-time favorite lip balm that’s made right here in Lake Tahoe, but it’s also a mellow state of mind. I haven’t had any grand adventures take place since I last posted – only small ones that occurred primarily on my walks and hikes, but small is good enough for me.

During one of my daily walks, I noticed this roof was alive…

And on another stroll, I discovered this beautiful split tree trunk bridge 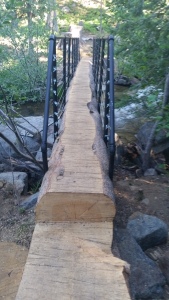 The girls playing large-scale chess at The Village at Squaw Valley. I couldn’t believe it when a crowd formed to watch their intense game! I took this shot when they were just getting started.

I’ve been lazy during most of this trip, but I’ve made some progress with my book.

With the help of my former coworker at the Santa Cruz Public Libraries, the date for my first book event is set! It’ll be at one of the library branches on Thursday, October 19th at 7:00 p.m. – further details will be firmed up in early August.

The heat is now officially on – I have three months to get my presentation together, and you can bet my new Toastmaster friends are going to help me with it.

On the promotions front, Linda Joy Myers, President of the National Association of Memoir Writers, inspired me to create a “press kit.” My publisher has a 1-page standard press release, but I wanted a more extensive, professional-looking press kit I could share with certain individuals and organizations.

I started reading Linda’s new memoir Song of the Plains last week. It’s  beautifully written, and I love the cover!

I felt a little audacious asking Linda if she would let me see her press kit, but I pushed through my fear because I knew it would be excellent. After all, she’s a memoir and publishing expert. Linda graciously said yes, and her awesome layout has been a tremendous help!

Lastly, I’ve had a culinary grand adventure, come to think of it. I’ve found one of the best brownie mixes ever: Sutter Buttes Natural and Artisan Foods’ Blood Orange Olive Oil Brownies Baking Kit. I’ve tried many brownie mixes, and this mix blew me away.

If you’re a brownie lover and a blood orange lover, order this dream-come-true – you will thank me. (They have double chocolate flavor too.)

And on that sweet note, I bid you a wonderful weekend!

See you next week!