How are you? I hope you’re doing well. I know it’s a tough month for many of us due to the change in season. I didn’t get a chance to write my typical rambling weekly post, so I hope you’ll take a few minutes to watch my vlog.

I share a couple tools that help me deal with challenges such as seasonal affective disorder and anxiety.

I meant to talk a little about my friend Ulla, creator of the blog Blahpolar. Although I didn’t bring her up, she has been on my mind a lot. (Some of you know the awful news: last month Ulla died by suicide.)

If you’re not familiar with Ulla’s blog, here’s the link to the About page. It contains some salty words, so you’ve been warned. 😉 I encourage you to read her blog – it’s one of my all-time favorites. I’m grateful it’ll remain active thanks to her friends. (Be sure to check out her quotes & memes too!)

Here are the links to the resources I mention in the vlog:

The Lose It! Update

Extraordinary blogger Bradley (Insights of A Bipolar Bear) and I are still trying our best to be healthy. It ain’t easy. My knee injury put a damper on my redwood forest walks with Lucy.  Due to stress, I’ve been overeating every night. Binge eating is a topic I want to address in a future post – unfortunately it plays a significant role in my life.

I’m happy to announce that the dynamo blogger Marie Abanga has joined our Lose It! group Wondrous Writers! If you’d like to try it (why not?) you can sign up for free at www.loseit.com – to join our group, search for the Wondrous Writers group.

See you next weekend, my friends! 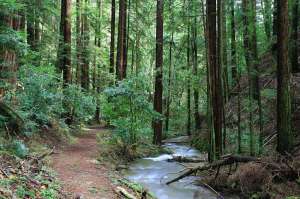 This post was originally four times as long, and it covered too many topics. Thankfully, I saw the literary light and I deleted most of it.

Some folks might think that writing profusely about all sorts of things sounds rather manic; if anything, I’m headed for the opposite direction. That’s due to my friend’s death. I miss her. I wish she was still around to read my post and write one of her trademark witty comments. She sure knew how to make me chuckle.

Apart from my not quite believing she’s gone, the fall is a rough time of year for many of us. I love the fall. Those who are close to me know that I consider Halloween to be the most important day of the year, but in the past I’ve become manic or depressed in October.

Although I’ve been stable for three years, I get nervous. That’s not that long a time. I use my Sunbox, which I’ll write about next week, and I’m doing something new that’s helping me ground myself, literally.

Yes, redwood baths. I’m not the only one to love these tall trees. One writer did a fair job of expressing his reverence for the “giants of the forest”. You might’ve heard of him.

The redwoods, once seen, leave a mark or create a vision that stays with you always. From them comes silence and awe. It’s not only their unbelievable stature, nor the color which seems to shift and vary under your eyes, no, they are not like any trees we know, they are ambassadors from another time.

Recently I learned that the trees emanate far more than silence and awe. In Japan there’s the practice of shinrin-yoku, or forest bathing.  The term “forest bath” is misleading, but I love it. Forest baths are simply mellow walks among the trees in which one aims to be present and notice the beautiful environment.

When I first went on redwood strolls, they resembled hasty showers rather than relaxing baths. I wasn’t taking in my magnificent surroundings. Instead of gazing up at the tall redwoods to see ethereal shafts of daylight peeping through their branches, I stared at my feet plodding along the dirt trail.

I ignored the refreshing, cool scent that was a unique combination of Fall Creek’s redwoods and the other trees. It took time for me to change my old habits, but after reading an article about the physical, spiritual and emotional significance of forest baths, I began regarding the forest in a totally different way.

Now, brace yourself for some dry statistics – they’re very convincing and cool, so that’s why I’m including them.

Some benefits are derived from inhaling the forest air. The trees emit organic compounds called phytoncides such as alpha-pinene and d-limonene; these are substances that are also found in some essential oils such as grapefruit. (I worked at an essential oil practitoner college in the 1990’s, so I got a big kick out of that fact!)

Check this out: these amazing phytoncide compounds not only protect the trees and plants from insects and disease  – they can benefit people. A 2009 study published in the International Journal of Immunopathology and Pharmacology cited a direct link between inhaling phytoncides and an increase in the body’s natural killer, or NK cells.

NK cells, a major force in our immune systems, help identify and destroy infected, damaged, harmful Satan cells. They’re considered important in the study of cancer. Another study published in the International Journal of Immunopathology and Pharmacology found that forest bathing significantly increased the activity of NK cells by an average of about 50 percent. Whoa! I like that.

If that stat wasn’t cool enough, there’s another convincing reason why forest baths can help anyone suffering from depression and anxiety:

the power of the color green

Color theory studies have shown that green triggers emotional responses including relaxation, calmness, happiness, comfort, peace, hope, and even excitement. One reason the color green is thought to generate positive responses is due to our genetics. Green environments signaled to our ancestors that there was the presence of three essential aspects of survival: food, shelter, and water.

I found the Japanese tradition and studies fascinating. It was validating to learn my humble walks had health benefits galore. Next time I want to pass on a forest walk, I’ll remember that it’s free and it’ll make me feel better…plus I won’t be billed for it by any greedy insurance company!

A Fun Public Scene: Avonlea wanted to try one sip of the pricey java; naturally she spit it out and entertained the Silicon Valley commuters!

After reading ketogenic articles and the bestselling book Keto Clarity, I finally bit the bullet and tried bulletproof coffee. (If you caught that pun, you’re a quick one!)

A couple weeks ago Avonlea and I went to the high-end cafe Coffee Cat in Scotts Valley. Scotts Valley is home to many Silicon Valley commuters and their multi-million dollar abodes. 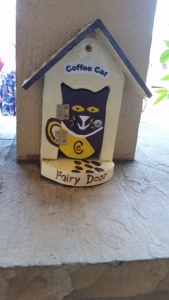 I was excited to learn that Coffee Cat sold their own version of bulletproof coffee they called “Ironman Coffee” to avoid being sued by Silicon Valley bulletproof founder Dave Asprey. Silicon Valley is only 30 minutes away, so it’s entirely possible he could find out about the breach and sue away.

When I tried my Ironman coffee I was disappointed.

My cup cost $5.50 for about 10 ounces, and consisted of coffee, Kerrygold butter and MTC, which are medium chain triglyceride fatty acid – yummers  The coffee had all the right elements, but it tasted pretty gross. There went $5.50 + tip down the drain.

Last week I had the opportunity to try a homemade version of bulletproof coffee at my friend’s house. She combined about 8 oz. of Peet’s Major Dickinson’s coffee, a heaping teaspoon of organic butter, and a tablespoon of organic coconut oil. She simply mixed it together with a spoon instead of using a gold-plated $500 blender that also doubles as a kareoke machine.

I didn’t have my hopes up high that her concoction would be palatable, let alone delectable. I was pleasantly surprised to find it very yummy and had two more cups!

Inspired, I bought the same ingredients and made my own version. It was far better than Coffee Cat’s Ironman fiasco, but not quite as good as my friend’s cup, and I can’t figure out why that’s the case…it’s a mystery! If I figure it out, I’ll write about it here.

Anyway, articles such as this one and a blog post (and comments) by Dr.  Georgia Ede imply that the ketogenic diet can make a major difference in bipolar disorder symptoms. If you haven’t read any of this material before, it’s worth checking out.

The Lose It! Update – It’s Not Going So Well For Us 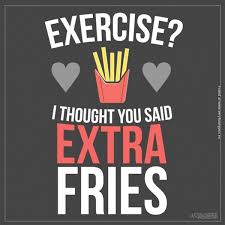 Awesome blogger Bradley (Insights of A Bipolar Bear) and I are struggling with our healthy eating & exercise routine, but we aren’t going to give up. We’re still using Lose It!’s website. Nothing’s gonna stop us now.

If you’d like to join us, sign up for free at www.loseit.com. and search for the “Wondrous Writers group”.

Thanks for reading, and above all else, have a great Thursday night, Friday & weekend! See you next Friday.

Dyane’s memoir Birth of a New Brain – Healing from Postpartum Bipolar Disorder with a foreword by Dr. Carol Henshaw (co-author of The Modern Management of Perinatal Psychiatry) will be published by Post Hill Press in October, 2017.