After my controversial electroconvulsive therapy (ECT) post was published on April Fool’s Day, it received quite a few scathing comments, so I felt some levity was needed today.

Although this post isn’t 100% hoot, nor is it politcally correct, I hope you’ll cut me a little slack for being opprobrious (your new vocabulary word for the day)! 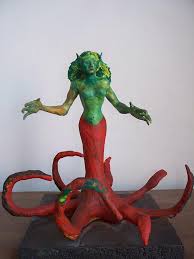 Get ready to Kraken!

A couple days after that weird cycle began, I read a fascinating post by blogger Andrea at Bipolar Phoenix Andrea – My Bipolar Life and How I Deal With It that our moon may have been partially responsible.

Andrea’s awesome post explained a lot about what took place during what I’ve come to call The Kraken Lady incident. (The Kraken is a legendary sea monster – for a complete description please visit here.) 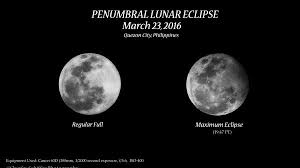 Last Thursday afternoon, my life was going well. I received a beautiful gift from my Mom. She sent me a long, flowy green dress, and I tried it on. I usually wear super-grungy, hand-me-down clothes, so it was a novelty to wear something new and clean! In honor of wearing my dress, I put on some makeup and brushed my hair!

I finished getting ready to take Rilla to her ballet class and Avonlea joined us for the ride.

Before running out the door, I checked my email and spotted a message from the acclaimed psychiatrist/Huffington Post blogger Dr. Carly Snyder who shared my postpartum bipolar disorder post on her blog. Dr. Snyder’s email invited me to be a guest on her new radio show this spring.

WOW! I did a little happy dance. That didn’t happen every day!

I was feeling pretty good, something as many of you know I never take for granted.

Although I rarely bring Lucy with me when driving the girls to ballet because she barks in the car, she gave me that look – the look that said, “Mommy (yes, I’m her mom) please take me with you!”

High on my new dress smell, Dr. Snyder’s invite, and the warm feel of spring in the air, I decided to bring Lucy with us for the ten-minute drive up to Boulder Creek. 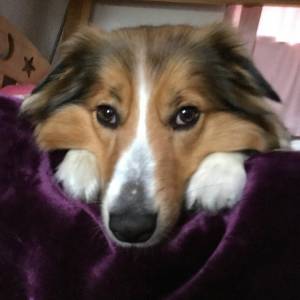 Little did we know that The Kraken Lady was about to do a major buzz kill!

When arrived at the church where ballet took place, I parked my old Suburu on the street alongside the church. Rilla hopped out of the car to join her best friend who was in her class. Her BFF’s dad would take Rilla home so that Avi and I didn’t have to wait an hour.

Before Avi, Lucy and I left, I got out of my car for a moment. I didn’t see anyone near us, neither human nor animal, so I opened the trunk door so Lucy could get out and briefly stretch her legs.

My sweet Scottish collie walked over to the sidewalk onto a patch of dirt. The corner where she stood was partially covered with a few straggly plants that looked like weeds. Lucy just hung out there – no pee, no poo, nothing. Happy as a clam.

A woman in her late fifties pulled up in a big, shiny white truck and stopped in front of my car.

She looked at me with disdain and said in a nasal tone, “Why is your dog in my flower bed?”

Within five seconds, I went from confident to a quivering, fearful little girl who was caught with her hand in the cookie jar.

I pulled Lucy’s leash so she was next to me and I began apologizing profusely along the lines of “I’m so sorry, I’ll never let it happen again…”and at first I meant it.

Avi sat in the car with all the windows rolled down, and she watched the proceedings with a “What the hell is that lady’s problem?” look on her face.

Of course Lucy didn’t make a peep. And this is a dog who barks like a freak!

I allowed this woman to go off at me for at least five minutes, which is a long, long time. She just wouldn’t stop. I tried to keep my cool, but finally I snapped, and interrupted her mono-sentence with,

At that, clearly satisfied that she upset me to that degree, she drove off in her $50,000 Toyota and pulled into a long driveway, out of sight.

I was shaking. Why on Earth did I allow this stranger to speak to me that way, and for so long? I was allowed to make one mistake. She was obviously not well. Of course I knew I needed to be compassionate to her odd mental state, but still, that’s no excuse for what she did to me.

I thought I had come further in my assertiveness than becoming a puddle of jelly.

The following day I had my standing session with my counselor. She used to take her daughter to ballet on the same street and she had an interaction with another resident. (What a neighborhood, eh?)

My therapist was walking her sweet black lab Luna at the opposite end of the street where I met The Kraken Lady. It was the first time she walked there and she reached a cul-de-sac. At that point, a woman came out and started yelling at the top of her lungs at my therapist about how she couldn’t be there.

My counselor, a stunning blonde German who’s six feet tall, took one look at this person and said in a loud, commanding voice,

“Hold it right there!”

The woman stopped her bellowing.

Then my therapist told her, “You can’t talk to me like that!”

The woman scurried off.

How I wish I said something like that, not just for myself, but as a role model for my girl.

The silver lining to this ridiculous fiasco is that Avi and I drove away thinking of wacky things I could have done in this situation. Avi loved our brainstorm, and while I’d never do any of the following, it felt good to let it out.

Most importantly, I learned my lesson: I’ll never again allow myself to be a verbal doormat to anyone. It’s so passé! When I’m tested again (my therapist said it’s a matter of when, not if!) I’ll let my inner Daenerys Targaryen out and fly! 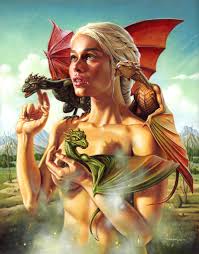 Things I Wish I Had Done When The Kraken Lady Attacked

NUDITY: Perhaps I could have stopped her yell-fest if I had simply disrobed. Sudden bouts of nudity could potentially throw anyone off guard.

ROMANCE: Ask her out on a date. Licking my lips lasicviously, I could’ve said in a sultry tone, “You know, lady, you’re kind of cute. Wanna go out to Scopazzi’s after I drop off the rug rats and get to know each other?

THE SUPER IMMATURE METHOD: A few weeks ago I took the girls to Bookshop Santa Cruz as a special treat. After they picked up some bestsellers, we walked through the novelties section. They asked for this, and I caved and actually bought it.

I wish I had the container of fake poo with me during my tête-à-tête with The Kraken Lady. As she ranted, I could’ve opened the container, help myself to a bit of “poo” and rub it on my face, explaining  “This is my afternoon beauty treatment – my dog Lucy has extraordinary poo and it makes my skin sily smooth! Want some?”

WHEN IN GRATEFUL DEAD COUNTRY….I could’ve started doing a trance dance like this….

HOLA! COMO ESTAS, SENORA KRAKEN? There’s my high school Spanish option – I could’ve spoken to her at length in Spanish, and pretend I had no idea what she was saying!

ZOO RADIO QUESTIONNAIRE: I could’ve asked her a bunch of absolutely unrelated questions, “Zoo Radio Style”-  listen to this for a ridiculous giggle:

Extensive prep is needed, but it could work. I’d have a very official-looking police “badge” created. In the Case of The Kraken Lady, I would’ve whipped out my badge, showed it to her and said I was investigating a murder near her home and explained that Lucy was my official police dog.

DO YOU HEAR WHAT I HEAR?:

Shifting from side to side with a perplexed look, I could’ve explained that I had uncontrollable bowel syndrome and crouch down, yelling to Avi to please find me my bucket!

Finally, I could’ve offered her two of my emergency Seroquel pills that I carry with me.

But apart from healthier activities (therapy, exercise, etc.) I truly believe that sometimes you need to fantasize about doing things like this to let out repressed anger.