Alexis Zinkerman is a gifted poet, author, journalist, blogger, plus she’s a mental health advocate. I’ve blogged about Alexis’ powerful, poignant novella “Brooklyn” (That blog post was titled “My Life-Affirming Alternative to 13 Reasons Why”) and her stunning poem “Metronome” she wrote specifically for lucky me!

In turn, Alexis interviewed me and reviewed my book Birth of a New Brain for her  blog “A Mile a Minute.” I threw a lot of information at her during our lengthy conversation, but she took it all graciously, professionally in stride.

Alexis has a great, diverse blog in which she shares all kinds of cool resources, and I encourage you to check it out when you have the chance.

I’ll see you next Friday and let you know how my first podcast recording with Dr. Katayune Kaeni’s Mom & Mind Podcast turns out. Yes, I’m nervous, although it’ll be easier than giving a Toastmasters speech!

I’ll also share a little info. my psychiatrist emailed me about a new, low-cost, alternative method that might help lift depression. Stay tuned. It’s important to know about every tool that exists that might help us, isn’t it? I’m back to using my Sunbox DL bright light in the mornings as we ease into colder, darker times.

Have a good weekend, friends, and please let me know how you’re doing if you feel so inclined…

p.s. My book finally became available on Kindle!  I was excited to see it made Amazon’s Top 100 bestsellers list in the “bipolar” category. While that sounds groovy, I knew the list fluctuates wildly and I’ve been told by published authors the ranking system is inaccurate and worse. So, while I don’t take the list seriously, I couldn’t help feeling thrilled to see it near Carrie Fisher’s #1 book!

I first came across Dyane Harwood’s blog after she left continuous comments on my blog and we began a conversation through email and in the comments. Dyane writes her blog after being diagnosed with peri-partum bipolar 1 disorder to help others make sense of their condition and find resources. Dyane’s bipolar was triggered by childbirth.

“It was a trifecta of hormones, genetic predisposition, and sudden sleep deprivation,” she said during a fifty minute conversation we had over the phone.

Dyane’s father was also bipolar. And even though she lived though a childhood of moodswings, her own mood shifts were not treated until the births of her daughters. She said that today there are medication studies by perinatal psychiatrists about how to treat women who have been diagnosed before becoming pregnant.

A few weeks ago I published the post Stunned by Alexis Zinkerman’s Metronome – my post title says it all. Please read it if you haven’t had a chance yet.

After I read Metronome, I bought Alexis’ novella Brooklyn’s Song and I wrote a review that doesn’t begin to do it justice, especially since I was repeatedly interrupted by my girls while attempting to focus.

Their crisis? They were in need of a special medicine called ice cream. (I need to fix the broken lock on my door!) At least I can always improve the review later on. In the meantime, I’ve included it in this post.

Here’s a sidenote:  I haven’t watched 13 Reasons Why on Netflix nor have I read Jay Asher’s book, and I have no plans to do so. I rarely read or watch anything about suicide because I’m too triggered. While my intuition told me to steer clear of 13 Reasons Why I sensed Alexis would create a work that wouldn’t trigger me, and I was right.

The heartwrenching topic of teen suicide has recently been covered in film, television, and young adult fiction more than it ever has before. Some of these endeavors are sensitively produced. However, other productions are harmful – they sensationalize teen suicide, depriving young people of realistic role models and situations.

Alexis Zinkerman’s outstanding novella Brooklyn’s Song was ahead of its time when it was first published in 2012 under the title Crazy Tragic Magic Life. Few books have ever addressed teenage suicide in such an insightful, wise manner.

The novella’s unique literary style is ideal for conveying the gravity of the subject matter without overwhelming the reader. At just eighty-eight pages, Brooklyn’s Song is the perfect length for depicting the journey of a teen’s grief over a great loss.

The reader is immediately drawn into the narrative from the first page. Brooklyn’s best friend Emily is still alive, and she reveals a secret to Brooklyn while the girls are attending a special event. The scenario quickly changes into one of tragedy.

As Brooklyn begins to move through the stages of grief, she’s resistant to therapy, but she gradually learns that counseling can help her a great deal. In a refreshingly unexpected way, Brooklyn utilizes the creative expression of writing to help her heal. Ultimately, Brooklyn begins to feel hopeful about the future again.

In each intriguingly titled chapter, Brooklyn reveals different sides of her personality. She describes her vulnerability, her loneliness as a high school student, and her burgeoning confidence in her writing. After some time has passed, she chronicles her exciting relationship with her first boyfriend.

Despite the harrowing storyline, I didn’t want to put it down – I couldn’t wait to find out what happened to Brooklyn!

Brooklyn’s Song is an artfully nuanced book. The novella reminded me of my favorite author Madeleine L’Engle’s classic A Ring of Endless Light in significant ways. Each author writes vividly, powerfully, and in a pragmatic manner. The two books’ complex-yet-clear storylines appeal to teens and adults alike. Each work grapples with the theme of suicide, the death of a beloved, and how death affects a sensitive, inquisitive teenage girl. Hope is woven throughout Brooklyn’s Song and A Ring of Endless Light, making these books truly worthwhile reads.

Brooklyn’s Song is a book I want my two daughters to read. It is a book I wish I had read when I was a teenager before suicide touched my life firsthand. This book rings true; at age thirty-three, Zinkerman was affected by suicide when her best friend took her own life. Because of that heartbreaking experience, Zinkerman was galvanized to write Brooklyn’s story.

I’m thankful that I’ve had the opportunity to read this beautifully written book. I highly recommend Brooklyn’s Song to anyone interested in how it’s possible to move forward in life after an a unimaginably painful loss takes place. 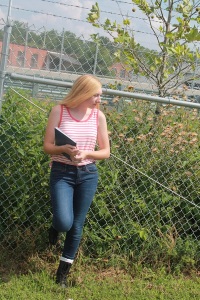 I’ll be back next week to share with you how my very first book interview turns out. I’m nervous, especially since I did a little homework on the journalist who has been assigned to interview me. Things were looking great until that changed. That’s all that’s fit for print…for now, that is. Stay tuned. 😉

Purchase the paperback edition of Brookyln’s Song on Amazon at this link.

All photos courtesy of Alexis Zinkerman

Dyane’s memoir Birth of a New Brain – Healing from Postpartum Bipolar Disorder with a foreword by Dr. Carol Henshaw (co-author of The Modern Management of Perinatal Psychiatry) will be published by Post Hill Press on October 10th, 2017. It’s available now on Amazon for paperback pre-sales, Kindle pre-sales will be available this summer.