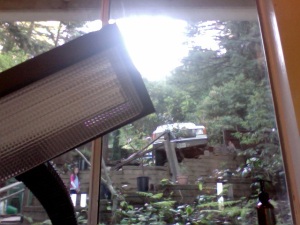 Last night, a large truck was parked on a steep hill across our street.  The truck’s brakes failed and it crossed our street, fortunately missing any traffic.  It then broke through our fence, and it would have slammed into our house had it not been for one pole keeping it at bay.

See my lamp in this photo?
That’s where I sit and write.

If that pole wasn’t set deeply in place, the truck could have continued down the slope another fifteen feet, hitting our home…and, potentially, me.

(I’m a drama queen, but everyone agreed that it WAS totally possible!)

All I can say is that I feel grateful today that no one was injured.  I’m definitely not sweating the small stuff!  The angst I felt over hurting Shannon’s feelings that I described in yesterday’s post is GONE.

If the truck had hit me while I was writing, I would have met my Maker the way that many a writer would wish to go!  But no, I shouldn’t make light of this, especially since I have two little girls who would never want to see their mom munched by an old truck.

When I first spotted the damage, I became very angry.  I may have uttered an expletive or three.  (I frequently experience feelings of road rage on my street because of our many clueless speeders, and I assumed one of them drove the truck.) But it turned out this truck’s owner is our neighbor and he has always been friendly to our family.  He’s taking full responsibility for the repairs.

It was refreshing to deal with someone who was kind and apologetic, instead of being faced with someone who was arrogant.  We could have easily been dealt with the latter type of personality.  So again, I’m thankful for the positives of the situation.  No one was hurt, the damage isn’t the end of the world, and the person responsible for the accident is being…responsible.

And here I am writing a blog post that has nothing to do with bipolar disorder! That’s nice for a chance.  Don’t get me wrong – I’ve found it deeply fulfilling to write about bipolar disorder, but it’s good to take a break from the topic every once in a while.  Even if I am writing about a car accident that could have been really, really nasty! 🙂

Drive safely, my dear readers, and make sure your parking brakes work – especially if you park on a hill!!