For those of you who are fortunate enough not to know what “pdoc” means, it’s a shorthand term often used for psychiatrists in the bipolar community.

My pdoc is wonderful.  Out of the myriad of doctors I’ve seen for bipolar disorder, “Dr. D.” has been the most compassionate, the most capable, and the most “normal” pdoc I’ve ever met with.  Maybe he seems normal because he isn’t clueless, overly detached, arrogant and/or misogynistic like the other pdocs I’ve consulted with over the years.  Even his fees are lower than other pdocs in this county.  He deliberately created lower fees as he wanted to reach people who couldn’t afford the exorbitant psychiatry rates in this area.

Most significantly, it was Dr. D. who suggested the only medication that lifted my severe bipolar depression.  I tried over twenty meds before I met with Dr. D.  He advised that I try the MAOI (monoamine oxidase inhibitor) Parnate and lo and behold, it worked.  Until then, I wasn’t aware that MAOI’s are used for “bipolar medication-resistant” patients, and it baffles me that none of my other pdocs even thought to suggest a MAOI (an “old-school”) medication.

Logically speaking, there is no absolutely need for me to be scared of Dr. D. – he’s anything but the boogeyman!

However, I’ve created my own psychological trip: Dr. D.’s authority as a psychiatrist scares the sh*t out of me.  I’ll admit I’ve done this sort of thing with the other pdocs I’ve encountered.  Every time I meet with Dr. D., I worry that if I seem off or if I say the wrong thing,or if I start to weep, he could *5150 me with his pdoc power!

I feel like I have to “act normal” in front of my pdoc.  It is exhausting and anxiety-producing to place that kind of pressure upon myself.  While I can often “pass” for normal, even when I’m having an anxiety attack, I’m always worried I’ll slip up.

So I try to act normal, and “fake it ’til I make it”.  It’s not a natural or comfortable way to live, to say the least.  Both of my parents were professional performers: Dad played the violin with the Los Angeles Philharmonic and was a soloist with various orchestras.  Mom won the University of Michigan’s first television acting award and she moved out to L.A. to pursue an acting career.  I realized I inherited a little bit of their talent after I won the lead role in a play produced by a professional L.A.theater company, and when my music teacher told my Dad he thought I could make it as a professional violinist.

In an ironic twist, I come from a family of accomplished doctors on my mother’s side.  My mother, who I think secretly wanted to be a doctor, brought me up to revere doctors and she treated them as demigods.  I developed my own attitude towards the medical profession in which I too worshipped them, and I followed whatever instructions they gave me…until I became acutely manic.  (That’s a story for another post.)

My primary point is that I didn’t want to act like a fake at today’s session with Dr. D.  Faking it was getting way old!

I remember how proud I felt when I was selected as the International Bipolar Foundation’s first 2014 *”Story of Hope and Recovery”.  I didn’t want my story be a sham!  The truth is that I am stable, and I’ve been this way for almost a year. (I know a year doesn’t sound that long, but I feel that a year of my mental stability is akin to calculating dog years, i.e. one year feels more like seven years!)

I am happy to tell you that when I met with Dr. D. this morning our meeting went well…much better than I expected.  Right off the bat,  I told him all about my deep-seated fears of his authority.  We spent most of our monthly session discussing how I felt and how to move beyond my fears.

I remember when I first met with Dr. D. he candidly shared how he planned to either be a physician or a therapist, and that many of his friends thought he’d do best as a therapist.  He chose the doctor route because he thought he could be more helpful that way.  I could see the therapist in him as he told me he was grateful I could be honest with him about my fears.  He emphasized that if I kept this information to myself, he wouldn’t be doing a good job.  Throughout our conversation, Dr. D. reiterated several times how well I have been doing, which is always fantastic for me to hear.

We moved on to discuss other topics such as my lithium refill, and blood tests.  We also talked about my sugar addiction of which Dr. D. (he specializes in addiction psychiatry) said must be contributing to my anxiety.  While it’s not pleasant to analyze one’s addictions, I felt comfortable, safe, and supported in doing so with him.  It helps that it’s obvious he knows what he’s talking about!

I know I’ll always be a little intimidated by my pdoc simply because he could dial a number and advise that I be involuntarily hospitalized – all within sixty seconds or less.  But worrying about that is like worrying about an asteroid hitting the earth. It’s more probable we’ll have another big earthquake here than Dr. D. pulling out the big pdoc guns.  I have to learn to…dare I write this “Frozen” phrase? 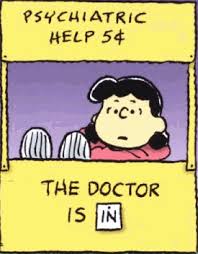 Here’s the link to my Story of Hope and Recovery

12 thoughts on “Freaked to Meet With My Pdoc”