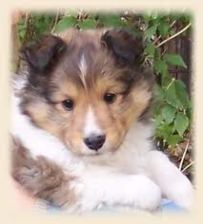 I never thought I’d have this gift again…and no, I’m not pregnant! (You probably figured that out already by the photo above.) It’s looking likely that I’ll have honest-to-God puppy love in my home.

I’ve been around dogs for most of my life, starting as a newborn.  My Dad had a predilection for Irish Setters, and we had two large, docile dogs while growing up in Los Angeles.  First there was Tanya, a mellow setter who was often accompanied my father as the “first mate” on his sailboat.  When she passed away, Amber joined our family.  She was my dog more than my Dad’s, and I adored her.  I took Amber with me on hikes in the Santa Monica Mountains, and I always felt happier when she was with me.

When I left for college and lived in a dormitory for the first year, I was dog-free. I know that being without a canine companion contributed to my loneliness and depression.  I didn’t think to volunteer at a shelter; I was totally overwhelmed with the lightning-quick quarter system of classes, but spending time with a dog would have helped assuage my sadness.

During my junior year, I lived in an off-campus studio on a large piece of land.  I decided to take the plunge to adopt a puppy. I fell madly in love with her, and I named her “Tara” after the Buddhist goddess of compassion, long life, healing and serenity.  We took many rambling walks on Santa Cruz Mountain trails.

On one horrible Easter Sunday I witnessed Tara getting part of her chest ripped out by an Akita also named Tara in a freak accident.  ($400.00 worth of E.R. surgery later, my Tara recovered.) She slept in my bed with me, she ran around the fields and beaches of Santa Cruz with me, and all who met her said she was one well-loved, happy dog.

During my  short-lived waitressing career, during my shift Tara escaped the yard where we lived at the time.  I returned from work and to my horror she had disappeared. I became hysterical.  It was a stormy night complete with thunder and heavy rain.  I drove slowly around the neighborhood screaming her name until my throat became raw.  I got out of my car and knocked on doors, asking my neighbors if they had seen her.  Hours later, I was so exhausted that I returned to my studio and collapsed on my bed sobbing, facing down on my pillow.  I had lost hope because I lived next to a major highway and I feared that Tara had been struck and killed by a car.

I left the door wide open, not caring about anything.  Suddenly I heard the whooshing sound of my thirty-pound dog jump up on the bed right next to me.  She promptly threw up a bunch of digested M&M’s all over the pillow.  I burst out laughing with relief and gratitude.  I couldn’t believe my luck at Tara finding her way home in the dark the way that she did.  It was a true miracle.

When Tara was seven years old, I adopted another dog to keep her company while I worked full-time.  Shera, an extremely energetic American Eskimo mix pup, joined our family.  Shera’s exuberance affected Tara in a positive way, and they played together spiritedly while I watched them with delight.  I lucked out that they got along so well – I knew it could have backfired. (When I lived with my dog Amber, my father brought a puppy home.  Amber became extremely jealous and depressed and she stopped eating.  We had to give the puppy to another home.) I now gratefully slept with two dogs on my bed…I didn’t give a whit about hygiene when it came to my girls.

When I met the human love of my life, fortunately he was a dog lover as well.  He adopted my dogs and he treated them like his own in every way.  The only difference between us as dog owners was that he insisted they stay out of our bed.  When we got married, Tara served as our flower girl. Shera was a little bit too excitable to be part of a wedding procession, so she joined us once the formal ceremony was over.  Her coat was sparkling white, and my dress was the exact same color.  I have photos of my holding her and she looked like she was part of the dress.  We took the dogs with us on our honeymoon to the stunning Mammoth Lakes area, California.  We could have left them back home, but we wanted them with us.

When our first daughter Avonlea was a year old, Tara’s health was failing.  I was at home and had an intense feeling to find Tara.  She was in the downstairs office, panting very hard and obviously in distress.  I started to cry and took her gently in my arms.  As soon as I held her and told her I loved her, she died.  I felt as awful, as if a blood relative had died, for she was part of my family and she had been with me for fifteen years.  Tara’s death was one of the few times I ever saw my husband cry as well.  Everyone who has a pet knows this day will come, and she lived a very long life in pet years.  Still, it was a shock and I grieved much longer than I thought I would over a dog’s death.

We still had our Shera, who missed her buddy.  I didn’t feel up to bringing another pet into our home. Shera received lots of loving attention from Avonlea and eventually from Marilla.  Then Shera hit age fifteen and she started having brain seizures.  After consulting with our veterinarian at length about her condition, it seemed like the most compassionate action to take was the animal euthanasia route.

I had always dreaded having a pet euthanized, but I felt in my heart I needed to do it with Shera.  My husband didn’t think he could handle being with her for the procedure.  I wanted to hold her in my arms the way I had with Tara.  By then I had been diagnosed with bipolar disorder.  I was in the depressed-but-functional stage and I thought I could be mentally strong enough to be with my dog when she died.  After I left the animal hospital the day she was euthanized, my depression grew much deeper and a vicious cycle had been triggered. I know that if we add a pet to our household, I’ll have to face the day she/he dies again.  Now that I am stable on my meds and I’m practicing habits proven to prevent bipolar relapse*, I am hopeful I will avoid falling completely apart when my next pet dies.

My two little girls have been begging us daily for a dog for many months.  In the rural mountain community where we live, most of their friends have dogs, cats, or both dogs and cats plus other animals too.  While we care about our three chickens, chickens cannot replace dogs in my book.  It’s like the wacky British saying: “It’s like chalk and cheese.”

I can’t deny that I am really excited about having a new life in our house, especially when I know a puppy will bring so much joy into my daughters’ lives.  We can teach the girls to be caring, responsible pet owners and those lessons will be invaluable ones.  I like the fact that now that my eight-year-long storm of bipolar disorder has subsided, I feel stable enough to care for a puppy.  It won’t be easy, but I’ve raised two “angels with fur” on my own.  This time I’ll have the help of Craig and my girls from the very start.  Plus, there’s one thing about bipolar disorder that has proven something to me about myself – if I can achieve and maintain recovery, I can be a great dog mom.

* As discussed in Dr. Ruth C. White’s new book Preventing Bipolar Relapse: A Lifestyle Program to Help You Maintain A Balanced Mood and Live Well  practice her “SNAP” method that focsues on sleep, nutrition, activity, and people. I exercise, sleep well, take my medications religiously, and spend time with people.  I see my psychiatrist and counselor. I use my bright light “Sunbox” in the mornings to help with seasonal affective disorder-related depression and take fish oil supplements...and chocolate and coffee too.  (To those purists out there, I love chocolate/coffee big-time and they make me happy.)