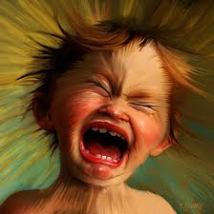 Today’s weather has been stunning.  Giant white clouds waft across the cerulean blue sky, and the air has a brisk, sweet quality thanks to yesterday’s rain.  It’s 3:00 p.m., and apart from going outside to our mailbox and to our wood pile, I’ve stayed inside our small house all day long with my two girls.

While I am ever-grateful to have a home, unlike so many people who don’t, being homebound is not good for my mental state.  I remember the many days when I remained indoors, bedridden with crippling bipolar depression.  While today I am no longer depressed (thank God, thank GOD!) I become easily ill-tempered when forced to stay at home.  “Forced” may not be the best word choice here – in a rare united front, my two daughters informed me they wanted to stay home.  Neither one had a serious illness, although Marilla had blurry eyes that had been dilated at the optometrist’s office the day before.

I didn’t want to drag the girls into my car against their wishes over this situation, so we stayed put.  I also took advantage of being home to finally start online traffic school, a necessity I have been putting off.  (Due to my foolishly speeding to a counseling appointment, I got a ticket for a whopping $300.)

Anyway, I realize that my bellyaching is ludicrous, and that many people would love to have this kind of “problem”.  But I’d like to use my “get out of jail free pass” for whining just for today.  Maybe some of you might even relate to my frustrations, and find comfort in knowing that you aren’t the only one who experiences what I describe.

I felt so icky this morning that I decided to take a shower, even though I try not to do that if I’m the only parent at home.  For some reason, when I shower after Craig’s gone to work while both girls are home, they get into fights.  No matter how much I ask them behave themselves while I shower, they still bicker.  Sometimes they do worse than simply bicker.  Today they fought like cats and dogs just moments after I felt the lovely hot water pelt my back, and I was absolutely furious.  It was an awful scene, and as soon as I could exit the bathroom, time outs were given.

After that horrid debacle I was in a totally foul mood.  My thoughts drifted to an email I received the day before. The message was from a local parents group that I’ve belonged to for years in which parents ask questions of one another and receive advice.  As it had been raining that day, a parent asked for tips on fun things to do with kids when they are staying inside all day.

One impressive (and intimidating) response was:

“Rainy days are great for:

Documentaries
Learn to cook something new
Crafts, Crafts, Crafts
Face time with Grandparents
If you have a microscope, look at all kinds of things!
Board games
Clean with fun music in the background!!
Put out a puzzle on a card table and dabble at it while you have time
Slime/Goop/Playdough – the recipes are out there
Make the best popcorn and watch movies like: The Count of Monte Cristo, Finding Nemo
Your own home is a wonder of possibilities.”

The other reply included other possibilities such as a “drizzly hike to see newts at the elementary school, or go bowling and stroll the arcade at the Santa Cruz Beach Boardwalk, visit downtown museums, go to the local aquarium” and more.  Doing any of those activities didn’t appeal to me; as some of you know, I’m not a crafty mom.  Plus I was emotionally and physically drained from the tantrums.

I wanted to bury my head in the sand.

And I did bury my head, metaphorically speaking of course; I did that all day long by checking out of engaging with my children.

Yes, I was “productive” in studying my scintillating online traffic school information, and yes, I made sure Avi and Rilla had food to eat and water to drink and they were safe.  But I’ve basically been a ghost in the house today, to quote Tracy Thompson’s great book title.

In one of my favorite books Anne of Avonlea, protagonist Anne calls a day of hers gone very wrong “a Jonah day”.  The “Jonah” reference alludes to a Biblical section in which the prophet Jonah was swallowed by a great fish and was disgorged unharmed three days later.  Much more happened to him than that, but you get the idea.  Jonah had a terrible, horrible, no good, very bad day.

Anne, a schoolteacher, loses her temper and whips a student, returning home utterly dejected.  After she tells her adoptive Aunt Marilla about her day, Marilla reassures her, “You take things too much to heart, Anne.  We all make mistakes…but people forget them.  And Jonah days come to everybody.”  I love Marilla’s perceptive comments to Anne.

Even though my day has felt like a Jonah day, and I made a ton of mistakes, I believe my resilient girls will forgive me for my transgressions.  Tomorrow will hopefully be better; I’m determined to make an attitude adjustment, but I know it will also be challenging.  My girls’ two best friends, also sisters, are coming to stay here all day.  I am taking care of them because I want to, but I’m also doing this as a favor to their caretaker who is under the weather.

While the girls will entertain one another, watching four girls under the age of ten in our 900 square foot home is not like going to the day spa.  At least the weather should be clear.  I’ll be sure to herd the precocious young ladies into our yard to disperse some of their energy.  We are also planning to make strawberry cupcakes – a rarity for this non-crafty/non-bakey mother.  You won’t find us cleaning with Ross Lynch music blaring in the background, or going to look at newts, and you definitely won’t see me handing out homemade playdough, but I’ll try to chill as much as is possible when one is a teetotaler and 100% benzodiazepine-free.

The bottom line is that my life is good.  There’s a small part of me that feels that I’m entitled to only blissful days after all the bipolar hell I’ve been through.  (I know that’s highly irrational, not to mention self-absorbed, but it’s true.)  Everyone has bad days, and this is not the end of the world stuff, so I’ll count today towards my yearly quota of Jonah days.

As a writer friend of mine writes in his weekly column, “Onward”.  Yes, that fits.  Onward.  I won’t look back.