No, the banana slugs are *not* my therapists…but they are pretty cool, aren’t they? 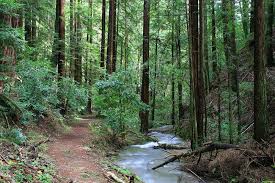 These magnificent redwoods are my therapists!

Last year when I started tapering off bipolar medication, I became an exercise fiend.  I knew how to work out well because I was an American Council on Exercise-certified personal trainer in the late 1990’s.  After teaching in a gym for a few years, I definitely preferred exercising outdoors.  Bypassing the gym was economical as well, so I felt good about my fitness plan.

The road in front of my home wasn’t pedestrian-friendly; it was “pedestrian-deadly”.  The steep mountain lane was devoid of sidewalks, and speeding cars appeared on it every few minutes.  (If I could do it over again, I would have bought a different house on a street that wasn’t full of near-death experiences!) I needed a safe walking option, so I chose our local high school track.  The track was set against the spectacular redwood-blanketed Santa Cruz Mountains, which served as a beautiful focal point .  The weather was usually warm and sunny, and I brought my iPod so I could listen to my favorite music.  I timed my track walks to take place when students usually weren’t there.  Walking made me feel grounded and healthy and I rarely missed a day.  I knew that I needed to exercise regularly in order to achieve my goal of being medication-free.

One day I wanted a change of scenery.  I headed for a trail next to the track which led into Henry Cowell Redwoods State Park’s Fall Creek sector.  This state park is home to a centuries-old redwood grove.  It’s a tree lover’s dream as it has other old-growth woods such as Douglas fir, madrone, oak and ponderosa pines.  At the risk of sounding like a hippie (which I am, in a way) the energy in this forest feels almost magical.  When I entered the forest I encountered a unique quiet.  The quiet was interrupted when I approached Fall Creek, but its gentle burbling sounds were welcoming and soothing.  Rays of sun peeked through the tree branches so that I didn’t feel claustrophobic.  I loved smelling the fresh, pure air.

I knew the state park attracted many visitors, but I found it so large that I didn’t come across other hikers too often.  An occasional horse or two would startle me, but they seemed mellow. The lack of people, as much as I enjoyed it, was cause for concern, especially as a woman hiking there alone.  As a resident of the area for years, I read reports in our local newspaper of occasional illegal incidents in the park.  I bought a pepper spray and I reviewed how to use it properly.  I always told my husband when I’d be there.  He wasn’t thrilled about my hiking in such isolation but the pepper spray made him feel a little better.  When I walked in the forest I had the spray in my hand, ready to use at any moment.  I didn’t use my iPod in the forest for safety reasons and because I wanted to hear nature’s sounds.  I was surprised to observe another park regular, a female runner, pass me on the narrow, rocky trails wearing her iPod (and hardly anything else) – that definitely seemed like an unsafe idea. I also always brought my fully charged cell phone, and I was lucky I had good cell reception in the forest.

There were other risks besides coming across criminals.  Mountain lions have roamed these hills for ages.  I doubted that my measly pepper spray could fend off an attacking mountain lion, but actual sightings were very rare.  At least there weren’t any bears!  There was the remote chance that I could come across Bigfoot.  Yes, Bigfoot.  The park entrance was five minutes away from the town of Felton’s infamous Bigfoot Discovery Museum.   Despite the museum’s claims of Bigfoot hanging out around here, I never obsessed about running into the hairy beast in Fall Creek.

In case you want to learn about the Bigfoot Museum, (who doesn’t?) here’s the link:

However, there have been a few times when I felt that my sanctuary had a sinister feel.  I think the creepy sensation was more about my projecting my dark moods upon the innocent forest rather than there being actual cause.  This gloominess usually happened when the sun disappeared from view.  Sunlight always has had a tremendous affect upon my psyche, and I’ve used a bright Sunbox light for a decade now.

My med-free attempt did not work.  When I relapsed while tapering off lithium last spring, I admitted myself to the mental hospital yet again.  I was in the unit, off and on, for over three weeks last summer. Patients were not taken outside unless they had a doctor’s note.  (I wasn’t informed of that ludicrous policy when I was there.  I found that fact out long after I was released, to my disbelief.  It was truly insane that patients who were able to be outside safely, with supervision, were not exposed to fresh air and sunlight.)  After I came home, I couldn’t stop thinking about “my” forest.  I felt like a caged animal who was finally given freedom.  The day I was able to drive to Fall Creek and walk on the path I had tread so many times was a momentous accomplishment.  Many days during the past summer I never thought I’d be in the forest ever again.  After being cooped up in what I can only describe was a horrible hell, it was incredible to use all my senses to savor the park once again.  I was still depressed, but it helped to be around my “tree therapists” for their very real comfort.

When the Indian Summer shifted in much colder weather, I dressed for the chill in a down jacket and gloves, with plenty of layers.  Finally, when my walks became too uncomfortable despite all my gear, I stopped my Fall Creek hikes to use my home elliptical trainer.  I missed Fall Creek but I was still lucky enough to be able to look out the window and see trees and sky on the elliptical.

Being in a mental hospital does many things to you.  For some very resilient souls, they stay at a unit, they get out, and they don’t really look back.  On the other hand, and I don’t use this term lightly; I feel that I have PTSD from being in these places numerous times. The difference between a locked-down unit full of suffering and a spacious forest comprised of graceful trees and streams is enormous.  It doesn’t get more “bipolar” than the difference between sterile civilization and majestic nature.

I will return to my hallowed forest when the weather changes yet again to warmth.  Now more than ever before, I am grateful for the freedom of being able to visit such a stunning, peaceful place.

7 thoughts on “My Redwood Therapists”