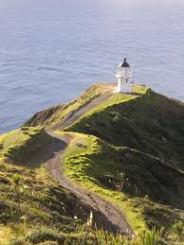 I am winding down recounting my trip to the Land of the Long White Cloud.  In an earlier post I mentioned that I packed a great deal of activities into the week I was in New Zealand.  Even so, one needs way more than seven days to see the North Island properly.  (I haven’t even mentioned the South Island, which I unfortunately did not visit, but there are a zillion incredible activities to do there as well.)

I signed up for a bus tour geared towards young, hip travelers lasting one very full day.  I was young, and a traveler, but as far as hip went, well, I’ll just note that I fit two out of those three categories!   One of our activities was visiting the famed giant sand dunes to “surf” on boogie boards.  When I got to the top of the steep dune, I froze in terror.  Even though I was a sometime daredevil, for some reason looking down the dune scared the living daylights out of me.  I was so disappointed, but I knew I couldn’t go through with it.  One of the tour guides, in an attempt to motivate me to face my fear, started making fun of me.   That backfired, and I said in no uncertain terms, “Ain’t gonna happen!”  When done properly, surfing the sand dunes did look very fun, and I had looked forward to surfing them.  However, I felt completely validated in my decision to pass after the next person attempted to surf down the dune. She wiped out very hard at the bottom, getting sand up her nose and in her eyes, and it was an ugly scene, complete with tears.  I was glad that I went with my gut and refused to surf despite the intense pressure I felt when the tour operator egged me on, as well as the eyes of my fellow sightseers.

The best part of that day was reaching the northernmost tip of the island: Cape Reinga, which in Maori means “underworld”.  Cape Reinga was known in the Maori culture as the leaping-off place of spirits.  That concept was briefly explained to us by our non-Maori tour guide in his “pakeha” way and I loved it.  (“Pakeha” is the Maori word for a person of European descent; some people find the word offensive, some don’t.  I couldn’t care less!)  At any rate, when we walked en masse to the lighthouse pictured above on that day,  it may have been the power of suggestion, but I felt a unique sort of gravity in the air.  I believed wholeheartedly in the spirit world and how certain places on our Earth had a special vibration.  (Now I really sound like the other folks in the town where I live: Santa Cruz, Homeland of the Hippies!)  It was a stunningly beautiful day and I found the setting to be perfect for contemplating the indigenous people who died and, according to their Maori tradition, whose spirits used that very point for a jumping off point into the next world.

At that time in my life I was not yet jaded by mental illness – my bipolar disorder experience was still light years away, and I was able to take in those experiences in a naive-but-wondrous fashion.  It has been gratifying for me to remember that epoch in my life which was virtually free of any thoughts about my ever having a mental illness.

We are more than our diagnoses, thank God, but it is so easy to forget that fact; at least it has been that way for me.  By my writing about the trip I took to New Zealand thirteen years prior to the bipolar diagnosis, it has been a mini-vacation for my weary brain. While looking at pictures of myself taken at Kare Kare and at other North Island spots, I see a young woman who did not view herself as seriously damaged.  Sure, I wasn’t thrilled with my shyness, my frizzy hair, my zits or my zaftig figure, but I felt that my brain was fairly intact and, compared to the surfers and hippies back in Santa Cruz, it was actually pretty damn good! 😉  I was still 100% drug-free at that point in time!  I was also wrinkle-free! (I now have what I call my “bipolar wrinkles”, i.e. two deep furrows between my brows, but ah, I’m in my 40’s now.)

The bit of authentic joy evident in my expressions in those shots would become almost permanently wiped out with my clinical depression later on.  Now some of that joy has returned with writing this blog, with reading my friends’ and strangers’ comments and “likes” here, and for being able to once again focus upon goals other than getting out of my bed.  Thank you for traveling with me just a wee bit into New Zealand.  I hope with all my heart that if you feel drawn to that country, you will have the opportunity to go there someday.