Last night I had something happen that blew my rather jaded, electroshocked mind.  It was a relatively minor occurrence, but it made me really happy.  The sequence of events that led up to the evening’s serendipity began yesterday morning, when I purchased a beautiful-looking book on my Kindle Fire.  It was titled “Day 6: When Motherhood and Madness Collide”.  The book’s Amazon blurb described “Day Six” as:

“a story of one of the roughest introductions to motherhood you can imagine. Jen Wight breaks the taboo around mental ill health to honestly recount her experience of developing postpartum psychosis and then severe postnatal depression. She tells the story of being convinced that she was Cameron Diaz; that she and Obama were going to use Facebook to save the world; and that she was going to cure cerebral palsy with dental floss. And it all started on day six of her son’s life.”

I don’t usually buy books about postpartum depression anymore; I’m on a quest to find books more specific to my experience of bipolar disorder, but this book caught my eye.  First I fell in love with its absolutely stunning cover . 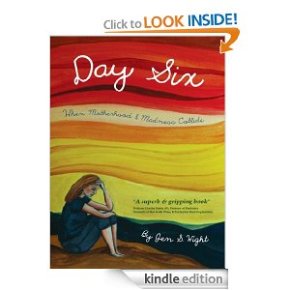 To say I’m picky about book covers is an understatement; I don’t think that I’ve ever even written that I “fell in love” with a book cover.  Call me superficial, but I feel that if a cover is excellent, it’s a good sign that the content will be on that level as well.  The reviews and endorsements were overwhelmingly positive.  One testimonial in particular, a glowing paragraph of praise by the actress and UK mental health charity MIND patron Juliet Stevenson, bowled me over.  Stevenson, an award-winning British actress, was in one of my favorite films, “Truly, Madly, Deeply” with Alan Rickman.

As I’m a major Anglophile and “Australiaophile” and the author Jen S. Wight has roots in both countries, I was further drawn to her book.  The price was equivalent to the cost of a double mocha and a cookie.  This purchase was meant to be, as far as I was concerned.  (It’s a good thing I’m addicted to buying books rather shopping at Macy’s. I frequently remind my husband of this fact.  He’s lucky I wear mostly hand-me-downs and the occasional Costco item.)

I stayed up late reading “Day Six” while positioned next to my poor six-year-old girl Marilla, who had a bad cold and whose legs burned in fever despite my giving her regular doses of medicine.  I was doing my best to take care of her, and I knew she was not in danger, but it was such a comfort to have the escape of devouring a good book.  I was drawn into its excellent, descriptive writing from the foreword.  The story was intense from page one. If I wasn’t so exhausted from the events of the day and from my worry over having an feverish child, I would have stayed up much later to read it.

I took a break from the book to get another dose of medicine for Rilla.  When I returned to my reading roost, I decided to quickly check to see if the author Jen S. Wight had a blog I could subscribe to, and lo and behold, I found she also had a WordPress account.  I selected the “Follow” button for her blog and then I returned to her book.

I had my WordPress account opened on my Kindle screen while I read “Day Six”.  A few minutes after following Wight’s blog, I spotted that someone had just “liked” one of my “Birth of a New Brain”posts .  (Yes, this was slightly disjointed behavior to flit back and forth from reading my book to checking out my WordPress statistics.  It’s a bad habit that I’m trying to break.)

To my delight, I realized that it was the author Jen S. Wight who had read my post literally moments before, and she “liked” it! (She really liked it! 😉 )   She must have noticed that I subscribed to her blog, and then she was able to check out my own blog in return.  The fact that she liked the post was the equivalent of my eating a Green & Blacks milk chocolate bar.  It felt good.

I got such a kick out of these turn of events. From reading about Wight’s background, I knew that she currently lived in Australia. It amazed me that in less than twenty minutes I had connected with an author on the other side of the world in this way.  I wondered if she even knew I had purchased her book that very day.  The old Police song “Synchronicity” started to play in my head, and I cracked a smile before I hit the pillow.

It was, for this complete and utter bibliophile/writer, an ideal way to fall asleep.